I have to be honest, this is going to be one of the hardest people to write about. Albert Charles Escalante is my grandfather. I love him very much. Notice my verbs are active, not passive. I love him. I don’t work on the Escalante family history for him, but to try to find out the “whys” of his choices, which inadvertently have impacted my life. You can learn much from a persons’ background. As much as we try, we are formed in the experiences of those who lived before us.

Via Facebook, I am friends with so many cousins, aunts, and uncles. Each has their own story about why they love him. But there has never been one to say anything negative about him. His life was simply fascinating. He lived several lives, in various segments. I remember him as the quiet grandfather smoking in his rocking chair during the holidays. When there were too many kids running around the house, he could be found reading in his bedroom.

I will work to provide the facts, those items that I can document. I have a feeling I have found out many more things than he ever wanted me to know. It makes me see him as human. And then there are those times were I want to say, “Papa! You’ve got some explaining to do!” So I guess it’s time to begin.

The 7th child of Leonardo and Rufina, Alberto Bernardo Escalante was born in El Rio, California on August 20, 1907. His middle name was a mystery, as he dropped it later in life. Saint Bernard’s feast day is on that same day. After seven children, it may have been difficult to find new names.

His Godparents are listed as Mr. and Mrs. Eduardo Gonzalez of Oxnard, CA. The Gonzales family owned a ranch whose frontage road became Gonzales Road. According to US Census Reports, Mr. Gonzalez was a horse trainer. He was also Godfather to Tia Panchita, Albert’s older sister.

The earliest picture I have of Albert is with his brother, Ruben. 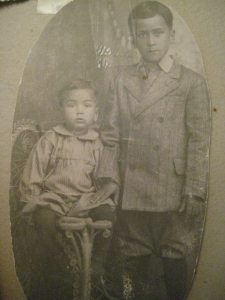 He was in the 3 year-old range at that time. He grew up close to the Romo family. His cousin Rodolfo would have been one of his good friends, being born around the same time and the families being so close.

Leonardo (his father) and his Uncle David owned pool halls. His oldest brother was a barber. This entrepreneurial spirit would be a part of him for a good part of his adult life.

In 1910, the family was living in Santa Paula, CA. Their address was 418 Santa Paula Creek Bottom (no street). He said he remembered taking a wagon with his dad to get supplies for the pool hall.

Both the Escalante’s and Romo’s decided to leave Ventura County. It’s one of those dark mysteries that I haven’t discovered yet. The youngest child was born in Los Angeles in 1914, then they were off to Orange County. This was much upheaval for a boy.

His father died in 1915 when Albert was almost 8. With his older siblings getting married and the need to stay with the Romo family having passed, Rufina took the kids to Calexico, California, by 1919 to be closer to her family.

Rufina with her three youngest children (L to R): Lupe, Fernando and Alberto.

You have to squint to see everyone in this picture. This is the only picture I have acquired of Rufina. This is a Border Crossing permit from 1919, when Albert is 12 years-old.

His mother only lives another 4 years in Calexico. According to family “legend,” Rufina has a boarding house during this time. Albert didn’t like school much. He was a perpetual truant, loving to go to a swimming hole on his days off.

He went to Rockwood School and his favorite teacher was a Mrs. Kennedy. “She was strict,” he said. “But she meant right.” He graduated from grammar school and after graduation his academic career ended.

His first job was as a Western Union messenger when he was 15 years old. His mother, Rufina, died while he was at a dance when he was 16. His childhood was over. Tia Panchita would say that he had sand in his shoes. He wasn’t one to just sit still. In some ways he was kind of like his father and brother, Jose.

Soon, Albert realized that he had a gift for fighting. Boxing. It would carry him into the next chapters of his life. Next up: 1925 – 1932. The Boxing Years.

(You can read about his stint in a Mexicali jail and international scandal in the blog post about Guadalupe Escalante in 1927. That happened when he was about 19 years old. There is no need to go into all that again.)