Today, I’m going to do something very different. I am going to write about the Other Side of my family. GASP! While this site is generally used to tell my mom’s family history, I want you to know, I have a dad too! My cousin John is the family historian over there. BUT. I had a conversation with a 91 year-old aunt of mine and she gave me a clue that led me to go hunting with a very fun find. I had so share with someone!

My dad’s parents were Leon Baltierra and Panfila “Pauline” Valenzuela. They were originally from Durango, Mexico. They left their home around 1914 and came to the United States. Their journey included my Baltierra grandparents, Cecilio and Trinidad. My grandmother Pauline never did see her parents again after leaving home at 13 years old.

I had known the names of my 4 great-grandparents, but had never seen any images of them. I love them dearly, but there was just a large disconnect for me there.

My aunt Irene lives in Reno. We’ve been chatting more the last few months. She told me a story that another aunt had shared, but this time Irene gave me a HUGE clue that made all the difference in the world.

One day, in the 1930s, my grandmother Pauline and some of her daughters were at the movies in California. It was a Spanish language movie. She saw a character on the screen and stood up, “That’s my father! He’s in the movie!”

Pauline’s parents were Hermenegildo Valenzuela and Paula Perez. Information on them was really limited. And I had looked up Hermenegildo + movies online. Nothing. But when talking with Aunt Irene she casually mentioned that his stage name was Pedro Valenzuela. He had been a cowboy in Durango, got into Mexican movies, and then came to Hollywood to make westerns.

Within about a week, I had quite a bit more information than before.

Exactly when he became Pedro I don’t know. But between the time Pauline left home in 1914 to 1920, he left Durango behind and got into movies. He was in the 1920 US Census, room mates with a Steve Matura in Hollywood.

From the e-book “The Movieland Directory,” page 144

He has several film credits. The first film was “Border Law.” It’s a short Castle Film from 1923. He isn’t the star, but he and his horse come riding in 0:58 seconds into the movie.

Pedro managed to get enough press that (once I knew who he was) I could get a better sense of what he was up to in the late 1920’s, early 1930’s. Not bad for an actor who was never the star.

You can see the costuming he has above changed from the bedazzled garb of the early 1920’s. And then, the Western/Old West genre started to fade. 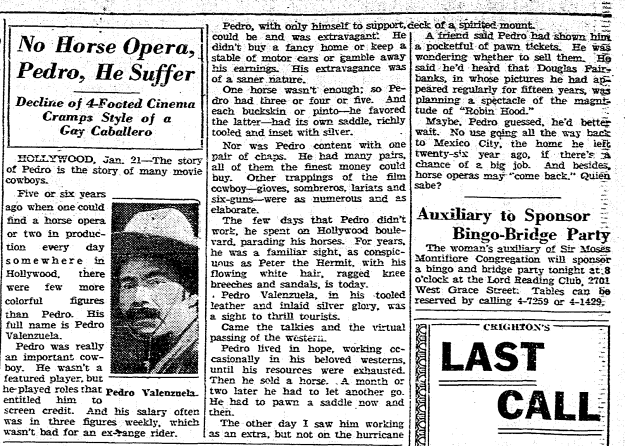 As the Great Depression kept its grip on the country, American audiences were looking more to comedies and musicals to take their minds off their woes.

You have got to love the internet. His second to last movie was “Let’s Go with Pancho Villa,” (Vámanos con Pancho Villa), 1936. In a time where home videos were non-existent, I can actually watch my maternal great-grandfather on-line. He played a soldier in the movie. The scene I found him in was where the soldiers were celebrating at the bar. You have to love the stereotype of “La Cucaracha” playing in the background, she wrote sarcastically.

You will find Pedro’s character (on left) drinking at a table with his friend who is trying to shoot the light out. The scene is at 55:45 in the film.

And that, my friends, is pretty much all I could find on him.

My Aunt Irene thought he got remarried, but I can find no trace of that. Or that he had more children. My grandmother left home with my grandfather at 13. Pedro must have moved into films immediately following.

I hope that he didn’t find himself terribly impoverished at the end of his days. I also hope he wasn’t terribly lonely. My family was up in the San Joaquin Valley of California by then. He could have gone to visit. He seems to have vanished.

However, I am thrilled to even have at least one photo of one of my great-grandparents.

Thanks for reading! Stay healthy everyone.

I’m going to list some names of the Baltierra/Valenzuela family here so that if someone Googles them, they might find this post. On Ancestry, I have tons of relations I could chat with on the Baltierra side, but my Valenzuela side is lacking. If you find this page because you have searched for the following people, please feel free to contact me!

Hermenegildo (Pedro) Valenzuela and Paula Perez (both of Durango)

And for the record, my dad’s Valenzuela is NOT related to my mom’s Valenzuela side. (We have the DNA results to prove it! Haha!)

* The above photo of Pedro and the Newsie was from this great blogsite: https://cinesilentemexicano.wordpress.com/2013/08/20/pedro-valenzuela-en-new-movie-magazine-de-enero-de-1931/