When I sit down for a few minutes to do some quick research between life events, there is really never any method to my madness.  A person or article will pop into my mind so I will start looking to see if Ancestry has any new hints on the person. I search newspaper articles to see if they were ever famous. Or infamous.

Every once in a while I go over old documents to try to see if I can analyze the information with new eyes.

According to ancestry.com, Leonardo and Mariana had three other children that I think MIGHT be related to the two I can confirm. Getting out a large sheet of paper, I wrote down the names of the children. In my non-Spanish-reading semi-expertness, I gleaned basic information: dates, name of child, names of parents and godparents.

I ventured to do quick look-ups on the godparents to see if anyone could lead me to more clues about my family.

Possible other Escalante siblings, with their Padrinos (Godparents) listed.

At the top of the list is a son with Salasar padrinos. This is good because Mariana’s mother was a Salasar. So maybe these were her cousins. The second son, Florentino, had a Bustamante godmother. Good sign too as Mariana was a Bustamante, but could find nothing definitive on these two. [Am I the ONLY person doing family history? Come on people! Post your trees! Okay. I’m done.] Maria Sisilia’s padrinos were interesting. I had seen their names before. My spider senses were on alert for two reasons: I have an uncle Fernando and Maria Ramirez de Barbachano’s middle name was Luisa.

When I looked for more information on Fernando Montijo and Luisa Bustamante, there were LOTS of kids to examine.

At this point, I start to play the “let’s be optimistic” game. There were Escalantes named as godparents. A few Bustamantes.  There was even a Leonardo Escalante, but his wife’s name was different. Which made me sad.

This family is the second one I have found that recycled baby names. For example: they named a child “Maria Adelaida.” But you will find the same name for a different baby born a year later. My guess is with life expectancy not as high as it is now, there were several babies who passed along the way. And the name was chosen again.

Holy Smokes, they had many a baby!

The one off-spring that fascinated me the most, was Fernando Montijo, Junior. His padrinos weren’t exciting necessarily. However. I discovered he was a traveler. He married Elvira Hugues in 1883. Fernando became a store owner in Berkeley, California. He traveled often to Sonora with his family. He crossed back into the United States in December, 1906, with his entire familial entourage.

Dropping the mic right there. Boom!

My family, up until the last two generations, loved naming new babies after family. You could easily track who might be in your line by those named before. SO easy! SO helpful! Now, not so much. But it used to be a sign of admiration, love, and respect.

I have done this not-necessarily-conclusive research which I will put back away for a while. Maybe when I am brushing my teeth, I will think about the Montijos again. I will wander to the computer between scout meetings, working, or mowing the lawn. It’s at the random times you find out if these elusive people are really family or not. It’s the beginning of the research.

So as not to leave y’all hanging, this was how Fernando Junior’s story ended.

In 6 months from now, I might wander over to another site to do a “quick look-up” on Fernando’s sister, Rosaura Serrano. Widow of Rafael Serrano, former Mexican consul to St. Louis. Whose daugther-in-law had a torrid affair that made the Midwestern papers. But that’s for another day…….

I have been fighting a sinus infection the last few weeks. Being here in Oklahoma in May is trying on my poor head. Cottonwood seeds float around like little flying saucers of allergen doom. I love it here, but May does have its downside. That, and the traditional spring storms with their meso-cyclones (tornadoes) is always fun and exciting!

But you are here for other reasons. First of all, I have delayed in sharing this a bit too long. I have been in contact with my Gil Samaniego cousins in Mexicali. If you remember they are Margarita Valenzuela’s descendants. They have been so kind in their friendship to me. One cousin sent me this wonderful photograph. 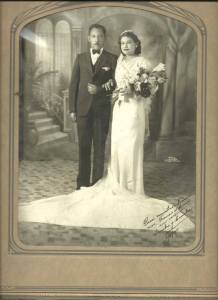 This is Jose Florencio “Lencho” Valenzuela and his lovely bride Concepción “Concha” Abril. He was from Margarita’s third marriage. He did not take his father’s last name. They were married in 1935. They lived in Mexicali. Lencho is my grandfather’s first cousin. What a lovely treasure. They had quite a few children, most who live in Mexicali.

Let’s see…what else? Last year I was bored and doodling and testing my memory. I managed to put a family tree together that seemed to get most of the families on it. 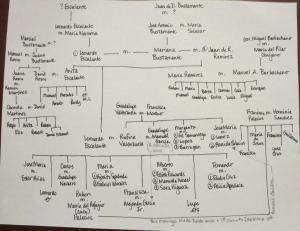 I think this could be helpful for those that might wander onto this site looking for a more collected framework. These are names I can definitively say have documentation to back up the theory of my branches. There are many other “side” friends and family theories that I have. But until I can prove it, they are all just theories.

I am outlining two new blogs in regards to my grandfather Albert. One will be about his third wife, Sara Higuera. I want to give her familial background a fuller picture for her grandchildren who may or may not know much about their past. The second will be more of Albert’s business and career dealings. I am kind of partial to him, so I want to give him the fullest picture I can. Haha!

I am in touch with another family historian who is working on the HIguera tree. Just when I think I have a good basic idea of Sara’s story, I’m told that Sara was married before my grandfather. WHAT?? So I go looking around and find this: 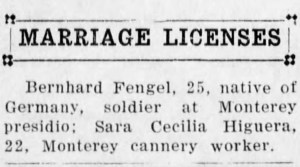 Neat! But there is a bit more to the Fengel story, so that will probably add-on a few more weeks of correspondence. It’s a never-ending spiral of information!

I’m off to continue researching. If you find you have any questions, please feel free to ask. Send me a message. I really enjoy reuniting family with family that isn’t even mine. 🙂