Alberto “Tony” Escalante had been boxing for a while, traveling the world. Soon, his personal life started to take shape. He had met a woman. They had an affair and she became pregnant. He didn’t marry her. She instead chose to marry a man who would later become a District Attorney for San Diego. The man adopted the girl as his own.

Tony decided that he didn’t want to have any more children. He had a vasectomy. Now, if you are a first cousin to me, you know this did not work. Our grandfather was truly taken in by someone. I just hope it wasn’t too painful a procedure. But let’s pretend we are with him in the 1930s where he believes that he is now impervious to children.

Tony must have been living in the Los Angeles area around 1935. He was probably doing what work he could being in the depression. It was around this time that he went to a fair. He saw a woman that he was struck with. He asked her to take a ride on the Ferris wheel with him. And that was it. For many years this is all I knew about her, except that her name was Edith Edwards. And she became his first wife.

*The following narrative could not have been accomplished without the kindness of Edith’s granddaughter. I will keep her name anonymous. But her assistance with this story was priceless.*

Edith M. Edwards was born September 1, 1896.  She was married twice before marrying Alberto. The first time to a Mr. Innis Millar, who had been born in Scotland. They were married on June 4, 1914. She had two children by Mr. Millar, William and Allene. Edith divorced him before 1920, when the children were toddlers. Edith’s parents, George and Sarah, took care of the kids while Edith worked as a waitress on a river boat that traveled the Mississippi from St. Louis to New Orleans.

She then remarried a Mr. Whitworth, of whom I can find no additional information. He wasn’t apparently the nicest of men. Allene had no love lost for this step-father, and was glad when her mother divorced him by 1930.

Edith and her whole family decided to make the big move from St. Louis to California. It was quite the expedition. Once the family settled in, they had a photo taking day. The first picture is the whole Edwards clan. They were a Midwest bunch through and through.

The only ones I can name are George Edwards (far left), Sarah Isabelle Edwards (next to him), and Edith (first on left in the top back row). George and Sarah are her parents. This picture was courtesy of a family tree owner at ancestry.com.

The above picture came from the photo shoot on the same day. It was sent to me by Edith’s granddaughter.

So, back to Alberto. He decided to marry this lovely woman. This is a picture of him in the 1930s. With the expression on his face, and the fact that this picture was cut in half, I would bet some very serious money (and I’m not much of a gambling person) that Edith was in the other half of the portrait. If you look closely, you can see a person on his left, sitting quite close.

My grandfather’s name at this time becomes very important. He wasn’t born Albert Charles, but he did choose this name. It is when he married Edith that his name change became official. His Social Security application form, his marriage certificate, and voter registration all show that he became Albert Charles Escalante (ACE). He continued to hold the nickname “Tony.” 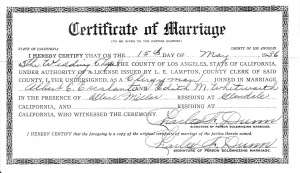 So, they got married! Their witness was Albert’s new step-daughter, Allene. He was caught in an interesting situation. He was 9 years younger than his new wife, and 9 years older than his step-daughter. Allene was on her own by the time her mother married. She also appeared to be pleased with the union. “We knew they were happy and that mother liked Albert,” her granddaughter wrote.

She also wrote this “I also think a family ring which mother said was Edith’s engagement ring came from your grandfather.” Allene’s daughters split the ring. The eldest has the original stone in a new setting, and the younger has the ring with a vintage stone put in it. It’s lovely to know that he gave them a something for the girls to treasure. 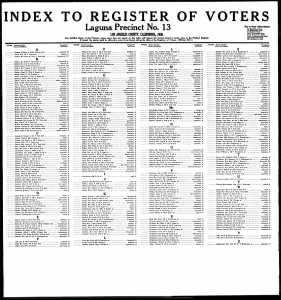 The two settled into married life.  The above is a copy of their voter registration. They lived at 4479 1/2 Whittier Blvd, in East Los Angeles. Albert was a nurseryman and a registered Democrat. Edith was a housewife and a registered Republican. I have looked at this sheet many times. But just this last time, I glanced “around” the form. Listed a few people above them, was Mrs. Sarah Edwards, Edith’s mother, who lived next door.

Allene was already older when they got married. Soon she was married and starting a life of her own.

Allene and Paul get married.

Edith’s granddaughter said that Albert made sure Edith had whatever she wanted. The granddaughter knew he was a boxer. She had heard he took on small fights to earn extra money.

However, their time together wasn’t going to last long. Edith contracted Tuberculosis. She was admitted into Sunland Sanatorium.

She passed away there on October 4, 1939. They were married for 3 years, 5 months. She was buried at the Rose Hills Cemetery. My mom and I were able to visit her grave in 2010. 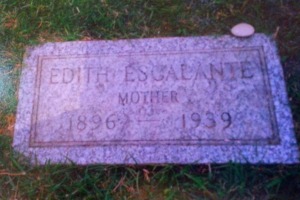 Up until the visit to her grave, I had NO idea Edith had been mother. Luckily, Allene and William noted “Mother” on Edith’s grave marker. I stared at this. We walked away that day wondering if she and Albert had children together. No, they hadn’t. I did manage to find Allene, but 5 years too late. She did leave behind two lovely granddaughters that were willing to share her story with me. Their kindness in this endeavor overwhelms me.

Albert loved Edith. Even when he married my grandmother, he still wasn’t completely over her. My mom’s middle name is Edith. Albert chose to make it the name they called her every day. Hopefully it ended up being a bittersweet way to remember this woman who made such an impact on his life.