Ahhh, the Escalante stories do continue. Just when I think I’ve dug and redug all I can, I find that there are more doors to be open. We each have so many chapters.

I went onto Ancestry a few months ago and found a new entry under the U.S. Social Security Death Index. It was for one Maria Elena Sepulveda – parents listed as Hipolito Sepulveda and Maria Escalante. Our cousin, born in 1917, died in Los Angeles, CA, in 2004. WHAT?? 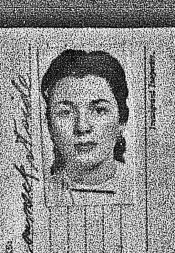 So, being the old-fashioned girl that I am, I filled out an application and sent it to CA Vital Records for an “old school” Death Certificate. Oooh, the waiting is the hardest part!

Before it arrived, I did some research on Maria Elena via updated Ancestry records. After having been born in Gloryetta, Orange County, California, her mother, father and their new spouses all ended up in Mexico City. On November 19, 1943, Maria Elena married one Pablo Velazquez. I cannot tell if they divorced or he passed away. They do not appear to have had any children together either.

Finally, her DC arrived. I had been able to learn quite a bit from this one piece of paper. Maria Elena had a 6th grade-level education. She had been a beautician. She had Alzheimer’s for a long time (down farther on page). I put her last residence into a search engine to find she was in the Brier Oak care facility until her death in 2004.

The best part of this evidence was the name of her informant. *hands clapping!* With that name I was able to discover how Maria Elena’s reappearance in the states unfolded.

Maria Elena was on several flight itineraries during the late 1950s in Texas. And a man, one Donald Ekman, traveled to see her too. They married on March 25, 1960.

Maria’s itinerary after her marriage to Donald Ekman.

A few years later they had two daughters. She was an older mom! She had her girls in 1962 and 1963 – when she was 45 and 46, respectively. Maria Elena and Donald were married until their divorce in 1972.  The informants name on her DC was her eldest daughter. I would normally share names, but I work hard to keep living people’s names anonymous. Her Death Certificate says she was widowed. Had she married a third time?

I have sent letters to the addresses I can find for her two daughters. They aren’t all that much older than I am. I hope that they decide to make contact. You know I have a TON of questions. Do they know about their aunts and uncles (Tia Maria’s other children)? They might find they have hundreds of extra family members they never knew about! I am also a friend of Hipolito Sepulveda’s family in the Wilmington area. These women have double the family.

Maria Elena was buried at sea via the Neptune Society. I will not be able to go to her grave to pay last respects. But, at least now, we now the end of her story.