The seventh child of Leonardo and Rufina was the second girl in the family, Francisca Escalante, also known as Panchita. While her “Delayed Birth Certificate” stated her birthday was May 4, 1904, her baptism certificate from the Santa Clara Church stated she was born in 1903. 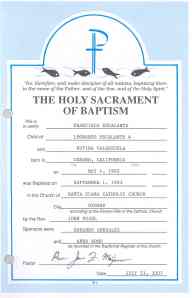 She was named after Rufina’s mother, Francisca Moreno de Valenzuela. Her godmother was Anna Romo, her godfather, Eduardo Gonzales. She lived in Ventura County for 7 years. Then the family started the move to Orange County. Not much was known about this time of her life. The tragedy of her father’s death in 1915, undoubtedly shook her. But as her elder sister got married and moved into Mexicali, the teenager probably started to be consoled with a social life.

Her family moved to Imperial County sometime after 1918. While they left behind one Romo family, they found comfort in two others. Dolores Romo de Orduño and Victoria Romo de Pesquiera were living in Calexico and Mexicali.  How directly related to these ladies they were is not certain. They could be nieces of their uncle David Romo, although here, Panchita called Dolores her cousin. The women were close to the Escalante’s during this pivotal time. 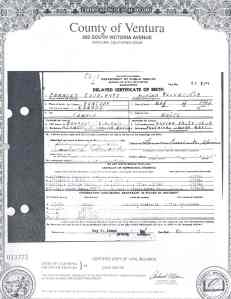 In May, 1919, the Escalante family was moving into brighter times. Two of the siblings were a part of a large baptismal party for Armando Marcelo Grisanti. She was 16 at this time. Here we know she was at the party with Alejandro Garcia, Jr. (her future husband). 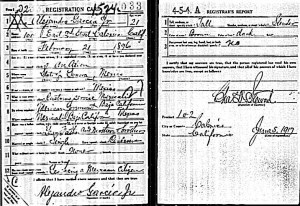 Alejandro Garcia was the eldest son of Alejandro Garcia Zamudio and Rosa Martinez Moreno. Now try to stick with me here. Alejandro Sr. had a brother named Manuel Garcia. Manuel was married to Rufina’s sister, Guadalupe. They were probably thrown together more than at that one baptismal party. His above draft card states that in 1917 he was working for the Mexican government as a customs agent in Mexicali.

According to her Delayed Birth Certificate, Panchita married Alejandro March, 17, 1922. She looked so very happy in her wedding photo. 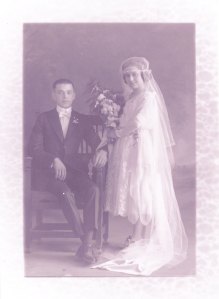 Her mother got to see this happy day before she died in 1923. In fact, Rufina probably also got to see Panchita’s first baby, Oscar Alejandro Garcia, who was born on January 14, 1923.  Her family life settled down a bit. Her father-in-law owned a grocery store and her husband worked there.

When Rufina died in 1923, things changed for the young couple. It appeared that Guadalupe began to live with this young couple. More than likely, the youngest brother, Fernando did as well. She became mother to her siblings as well as her own son.

Those who knew Tia Panchita when she was older shared these adjectives about her: strict, obsessively clean, status conscious, firm, controlling. The stories were never very light-hearted. After some digging into her childbearing years, I think I discovered why.

Oscar was her first child. Then came Elia Julieta Garcia on March 2, 1926. The little girls middle name came from Dolores Orduño’s daughter, Julieta, who had been named after her father, Julian. I’m sure all was quite well in the family, except for Guadalupe Escalante’s story in 1927, but that is a whole different entry. In 1930, Elia became ill with dysentery. Sadly, it killed her. 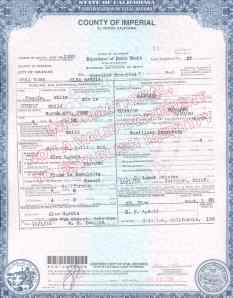 I would imagine Tia Panchita’s obsession with cleanliness started after this. Soon, another baby came along. Ruben Adolfo Garcia was born on November 12, 1931. 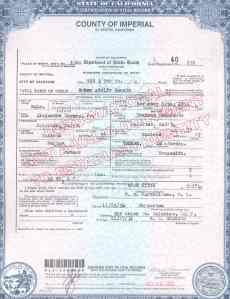 This child was named after her brother. All was going well. She did have one more immediate set back. A year later she gave birth to a stillborn girl. 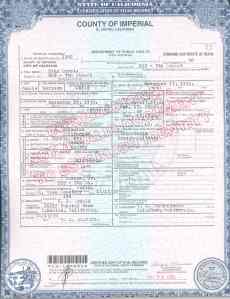 I truly cannot image such heartache. However, it did continue.

Panchita idolized her sister, Maria. By this time, Maria’s family was in Mexico City. No doubt, Gabriel Morale’ star was still shining brightly as a lawyer. She would visit her sister often. I have no documentation on exactly when it happened, but at some point, during a visit to Maria’s home, Baby Ruben also got sick and died. Several of the Escalante brothers were dispatched to Mexico City to retrieve the child. What is odd about this is that there is no grave marker for him at the Mt. View Cemetery in Calexico. And because he died in Mexico, I can find no paperwork on what killed him or how old he was at his death.

Poor Oscar was the only child left to Panchita and Alejandro. He was smart. And as Maria had a son who was going to medical school, it became evident that Oscar was going to have to do the same thing. He became a doctor.

WWII came along in the late 1930s. And so did the draft.  While the world kept taking her babies away from her, the US call to war was thinking of taking her only remaining child into its service. She was not going to let that happen. Below is a travel manifest for Oscar in 1945.

He was made to give up his United States citizenship so he would not have to fight in, and possibly die in, WWII. His mother was a force to be reckoned with and it appears that she won this battle of keeping her only child safe.

In 1940, Alejandro is a merchant in his own right, having a grocery shop. Yet, something took them to Mexicali, probably by 1950. Uncle Charlie lived with them for a while. They acted as parents at Carlitos’ wedding. They “took in” many nieces and nephews that needed care at one time or another.

They had adopted a girl that they named Elia. I had met her once in Port Hueneme when they visited my grandfather. After they passed away, we lost contact with her. No remaining cousins know where she is. Oscar died in the mid-1980s (?). Panchita and Alejandro were buried in Mexicali’s Cementerio Dos. Ruben and Charlie were also buried there.

I hope to find her gravesite this November. I’d like to put more of an official close on a life that was full of maternal pain but full of steadfast resilience for her family.  My grandfather admired her. He named his daughters after her and her daughter. As you can see, she anglicized her name as well. She became Frances Ruth Escalante Garcia. And even though she was just “child number seven,” she greatly influenced the Escalante family as its matriarch. 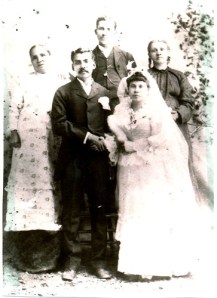 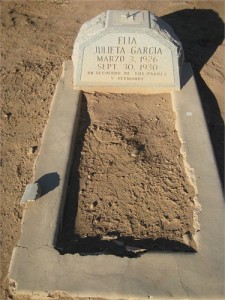 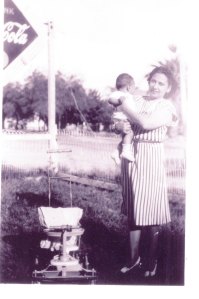 Tia Panchita with unknown baby. (Ruben? A niece or nephew?) 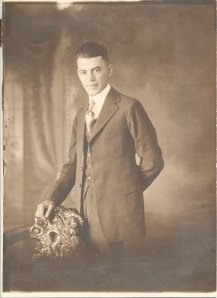 Tio Alejandro – probably before he was married. 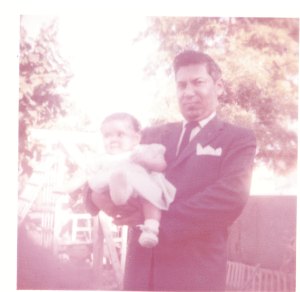