Thanks to new information discovered in the Calexico Chronicle, I am able to update and close Lupe’s story.

The eighth sibling in the Escalante family was Guadalupe (Lupe) Escalante. She was born in 1909 in Santa Paula, CA. She was born during the last great year of the Escalante’s living in Ventura County. She was the baby for 5 years, until her brother Fernando was born. Her eldest brother had already moved out of the house. Her dad died when she was 6, then she was her mom’s responsibility. The last three kids in the house were Alberto, Lupe and Fernando. 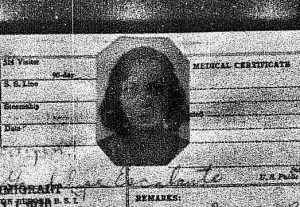 Guadalupe Escalante – on a travel manifest to see her sister in Mexicali.

In 1923, Rufina died. Alberto was 16, Lupe was 14, and Fernando was 9. The children went to live with various older siblings. From what I can gather, they moved in with Tia Panchita and Tio Alejandro. This was a key fact. Oscar had been born. Tia Panchita was busy mothering her own child. The reason this was important is that, while I’m sure the siblings were cared for, they no longer had parents to dote on them, and love them more individually. Alberto started working on his boxing career. But Lupe was a little less supervised.

Not much is known about her either. My grandfather never talked about her much. I had asked my mom’s cousin about her. He said that she had died at an early age, away from Imperial County and that the family had to go and get her body to bring back for burial. Something about “a man and a broken heart.”

It was difficult to find any information on a girl who was already a forgotten person in a big family. I was on the genealogybank.com website. I was doing my usual “go down the list of family members” routine, putting in everybody’s name when I got a hit on Lupe. Really?? Oh wait! Quite a few hits on Lupe. And her brother, my grandfather.

The first articles I had found were from the Spanish Los Angeles newspaper “Heraldo de Mexico.” For convenience of the reader, I am attaching somewhat equivalent articles from the “Imperial Valley Press.” (I will give a shout out here to the kind staff of the Imperial County Campus of San Diego State University. They used their microfilm machine to dig these up for me).

The cast of characters are as follows: Guadalupe Escalante, a 17-year-old girl who had been drugged, and raped. Antonio Escalante, her 19-year-old brother. You may ask, “But wait! Your grandfather’s name is Alberto.” My grandfather’s nickname was Tony. His boxing name was Tony “The Mexicali Kid” Escalante. The papers assumed that his full name was Anthony. Octaviano Moran – a married man from Mexicali. He was fascinated by Lupe. He took her to dances and promised to marry her after he left his pregnant wife.

Lupe ended up pregnant. Eventually, Tia Panchita found out about it and had Tio Alejandro file charges with the police department. Antonio wasn’t about to wait for the proper channels to get the man extradited to the United States. Understand that those who live in Calexico/Mexicali might not have seen the big border line that others saw. They were pretty much one big town. Not two independent and sovereign nations.

Antonio proceeds to take a gun across the border and bring Octaviano back to Calexico police custody. The court proceedings begin. However, there is a glitch. Antonio kidnapped Octaviano out of one country and brought him to the United States. Without his consent. And this is where the troubles started.

The articles told us:  Antonio then had a warrant issued for his arrest by Mexico. There was an “application for release of the prisoner (Octaviano) on a habeas corpus writ.” Antonio was arrested and taken to a jail in Mexico. Mexican ambassador to the United States, Manuel Tellez, and Secretary of State Kellogg were going to be discussing this matter together.

In the end, Octaviano Moran was freed because he was brought into custody illegally. From what I could find, he never came back to the United States. While I have the original trial minutes before all of the “you captured him illegally” stuff came out, he was never brought back in to stand trial for the attack on Lupe. Antonio was released from the jail in Mexicali in November, 1927. This was never discussed at Thanksgiving get togethers.

Octaviano was married to a Clara Escalante de Moran (no relation that I can find). She had been pregnant at the time that her husband was romancing Guadalupe. The son she bore was Luis Octavio Moran.

Guadalupe is still a mystery. The court documents say that she was pregnant, that Octaviano kept meeting with her at an apartment he kept in Calexico, and that he gave her pills (possibly to miscarry) but she never took them. What happened to the baby?

Recently, I found digital access to the Calexico Chronicle. What I normally do is put in the names of every family member to see what pops up. I found this article by putting in the address of Tia Guadalupe Garica – 910 Third Street. It was very fortunate, because I never would have put in the name Lupe Holman.

Announcement of Lupe Holman’s passing. From the paper dated August 23, 1934.

I’m not exactly sure why the funeral was held out of Manuel Garcia’s house. She had siblings who could have hosted. Also, Mrs. Manuel Garcia was her aunt, Rufina’s sister. Oh well.

She is buried in the Mountain View Cemetery. However, she is no where to be “found.” I had been told that Hems Brothers Mortuary has control over the cemetery. I have asked them repeatedly via letter to help me find those family members without headstones. To no avail. But at least we know where she is now.

I have ordered her Death Certificate from California. As soon as I get that I will post it. I am so glad that we know she was back with the family. Her life was not an easy one. It seems like she was happy on her own in San Francisco. I truly hope so.