Leonardo and Rufina’s first child was Jose Maria Escalante. One of the reasons it has taken me so long to write about Jose is that he has been missing all of my life. No one knew where he went, or where his life led.

Jose Maria Escalante was born March 19,1888, in San Pedro Palominas, Sonora, Mexico. He moved with the family to Ventura County at the end of the 19th century. He wasn’t one to do what his father did. That job was left to his younger brother, Leonardo Jr. He was not listed as living at home in the 1910 US Census when he would have been 22 years old.

He was near his family again when World War I broke out. According to his Draft Card he was living in Gloryetta, CA in 1917.  With his wife and child.

When Jose reappears (on paper) it is in 1918. He is on his way to Bisbee, Arizona. The purpose of his visit is to see his cousin, Frank Blackburn. Now this stumped me for quite a while. The Blackburn’s are considered a pioneer family in Bisbee. I have been in contact with a family member who is working on their tree. Judge Blackburn married one Margarita Escalante in 1888. She is later referred to as Margaret Blackburn. Frank was her son. Margarita’s father is Ramon Escalante. No one seems to be investigating Ramon’s family. I can find no relation between Ramon and Leonardo Sr, except for Jose’s say-so on this form.

On this travel manifest, it also says that Jose is single. No wife. No child. Had they died from the Spanish Influenza epidemic? He also made one pilgrimage across the border in 1920. This was around the time that Rufina went to see her daughter Maria and her children. My guess is that the whole family made a trip to see the expanding family. And luckily, our government took a picture.

Jose became a traveling salesman. He seemed to disappear from Imperial Valley. Somewhere along the way he met a woman, 20 years his junior, named Ester Arias. They married.

Ester was born to Juan Arias and Tiburcio Dolores Salas on May 26, 1907 in Las Cruces, New Mexico. Juan was a succesful tailor in town. Ester remembered having very fine clothes. Her mother died when she was young, before 1920. She was now the oldest female in the home with three younger sisters. After the death of her father, Ester moved back to where her Arias family was from, El Paso County, Texas. Her family was Texan from the 1790s, calling San Elizario home.

She met Jose and they married. They had their first child in 1927. Her name was Josephina Escalante. Sadly, the baby did not thrive and died within the week. 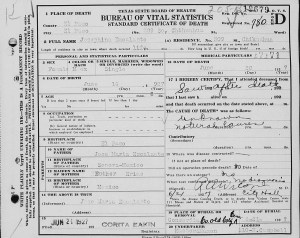 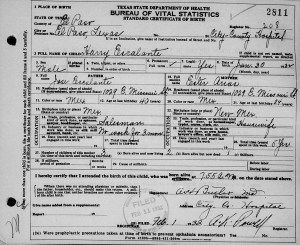 Ester was a good secret keeper. Her daughter-in-law recalls that Ester never discussed her years with Jose. One time she did let slip that he was a salesman that was on the road often while she was left with the two children.

In 1932, Jose appeared in Calexico. He was traveling across the border to see his brother, Ruben. He was thinking of relocating to the area.  (The form below was how I was able to find his living family with the name of his wife Ester and that they had come from El Paso.)

The second half of his manifest.

He used Victoria Romo de Romo as a witness to living in the country. He also referred to his beloved aunt, Guadalupe Valenzuela de Garcia, Rufina’s sister. An odd thing was that on his travel manifest he stated that he was born in 1898, 10 years after his real birth.

And then something happens. Maybe Ester learned that she was not his first wife. Maybe she learned he was 10 years older than she thought. Maybe it was meeting his extended family that did it. We will probably never know.

Whatever the reason, it affected their relationship. I found Ester. Living in Long Beach. And remarried. Something occurred between the time they visited Calexico to 1933, when Ester decided to leave Jose and never look back. 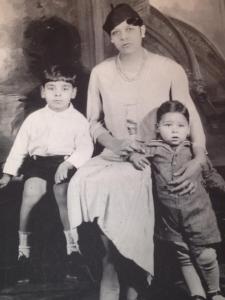 Ester remarried Manuel Sais. They had a son together, Manuel Jr., born in 1938.

Ester volunteered during the war. Her daughter-in-law said that Manuel was a very good step-father. The boys loved him. She also noted that her husband John had kept an eye out for the father he never knew. He had a cigar box with Jose Escalante printed on it.

Recently, I came across this “older man” draft card for WWII. Tio Jose was in Brawley, California, in 1942. He worked at a restaurant called Quatro Luces. He also seemed to live at the business. He still used his Tia Lupe as a reference.

The second half of his WWII Draft Card.

The second half of his card was interesting simply because we can see he was short, dark complected, slim with grey hair. And alone.

Whatever reasons that Jose was set apart from his family may never be known. He was there, but on the fringes in Brawley. He missed out on seeing his boys grow up from apparent choices he had made that his wife no longer wanted to deal with as well.

So much of my research could not be done without the kindness of others. I found John’s widow, Jose’s daughter-in-law. She and her family have been so helpful in my getting to know Jose, even though Ester kept her secrets. All of these photos came from her and I am grateful. She didn’t think Ester would like me knowing so much about her life. That made me giggle. Okay, it was more of a “Muahahaha.”

Ester did mention one last thing about Jose. She said he died a blind man. She never said where or when he died. But she did know that much. Had she been contacted upon his death? Receive a will? A last letter of regret? One last thing to find to get the chapter closed….