I recently made contact with Margarita Valenzuela’s grandchildren. They have been so wonderfully gracious in sharing information with me. While my blog is generally about the Escalante family, I realize that Rufina grafted the Valenzuela branch onto our tree. Rufina is kind of my favorite and I’m finding so much more about these relations of ours.  So the Valenzuela branch earned its own category today.

The basic run down is this:

Guadalupe Valenzuela married Francisca Moreno in Sonora, Mexico. They were supposed to be from Tecoripa. They farmed in Santa Ana. After he died, Francisca moved to Hermosillo with Margarita.

They had four children which I have been able to find. Those were:

This write-up is about Guadalupe. The first time I “came across” this aunt was on Rufina’s death certificate. Guadalupe is the official “informant.”  She was also listed on Tia Panchita’s delayed birth certificate. She was out there as a mythological being, but no one tangible. On one lovely visit to Tio Ruben’s son, he generously opened up his photo album. He is the baby in this picture, with Guadalupe in the center. My heart melted as I saw Rufina’s sister.

And then, I had to keep on digging until I found out more. This branch of the Valenzuela de Garcia branch has been very difficult to reach. I have met those who know them, but I haven’t been able to make contact with a direct descendant. Here is what I have been able to piece together. Starting with Guadalupe’s husband…..

Manuel Garcia was born August 17, 1872, in Ures, Sonora, to Manuel Garcia and Trinidad Zamudio. This is Manuel at his elder brother’s wedding. The photo was shared by A. España. She is a relative of the groom. 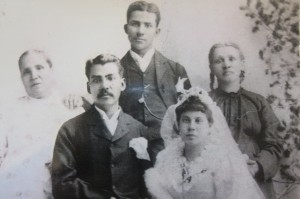 Guadalupe was born in Sonora on September 23, 1878. She and Manuel probably married around 1897. They proceeded to have many children. I’m going to gratuitously list them. You never know who will be doing a Google search. AND, many of my cousins could very well know their offspring, never realizing familial ties.

Enrique Felix – Born in Naco, Arizona, June 1913. If you read his birth certificate below, you will see he was the 11th child born, the 6th living. This would explain the large gap in children between Trini and Francisca, Francisca and Rene. I theorize that he died early as he is never listed in any of the US Census’ later.

Guadalupe – Born in Calexico, CA, December, 1917. She died young at the age of 20. She is buried with her father in the historical section of Mt. View Cemetery, Calexico.

Eloisa Martha – Born in Calexico, CA, January, 1920. She married a man named Perez. I cannot find an obituary even though she only recently died in 2003.

I have tried to track various leads, but no one has returned emails. I completely understand. Not every one reaches out to my “we are cousins!” announcements.  The one thing I cannot comprehend, is how, when Tia Guadalupe lived at 910 E. 3rd Street in Calexico, for what appears to be forever, my mom never knew about her.

Tio Ruben obviously visited her. My grandfather returned to Calexico in about 1945. During the time they lived there, my mom (and aunt) have no recollection of every meeting her. As I keep thinking it odd that family lost touch while living in an approximate 25 mile radius, this Garcia family lived on a street that intersects with Giles Avenue; a street my grandfather and his family lived on. Was it bad blood? Were feelings hurt? Was everyone just too busy to chat any more and then slowly drifted apart?

Rufina came to Calexico to be near her Valenzuela family. And yet, there is no connection in present day relations.

Tio Manuel died not long after this picture was taken on February 3, 1936. Tia Guadalupe lived at the same house until her death on February 13, 1960.

I have yet to find any more siblings for Rufina, but at this point I’m not going to say it’s impossible. They could even live right next door to me.  A cousin of mine, a son of my Uncle Jim, lives in Stillwater. I’m going to a wedding where the bride’s surname is Valenzuela. Don’t think I’m not going to corner her grandmother by the punch bowl. “Hi. Sooooo, where are your people from?…..”