What exactly brought the Romo family out from Ures or Hermosillo may never be known. When a person takes into consideration the mild climate of Ventura County  however, it was probably a no-brainer. And then there is California and the American Dream.

According to the 1900 US Census, the Romos get to Hueneme Township between 1892 and 1894. They have been married for over 20 years already. Anna has had 9 children. They currently have only three living sons: David Jr, Manuel and Amado. Amado dies in 1908. I cannot even imagine that kind of pain and heartache. David Sr. is working as a farm worker, like his brother-in-law, Leonardo.

Ten years later, the Romos are doing very well. Anna has had two more children, Mercedes and Rodolfo. Rodolfo is only a year older than my grandfather. I guess that they are good friends growing up like their big brothers.  My grandfather names his 5th son Rudolph.

In the 1908 Santa Paula Directory, David Sr has Pool Room as his occupation. Leonardo is still listed as Laborer. By the 1910 Census, both men are in business for themselves. While Leonardo is working a Pool Hall at 309 E. Main in Santa Paula, the Romos are down at 100 E. Main with a similar set up. David Sr. is selling cigars, tobacco and soft drinks. Manuel is a barber in the same building. 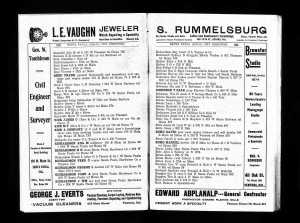 I tell you these families were close. They were working the same businesses at the same time! Quite amazing.

I have a feeling that Anna and Leonardo came from what would have been considered a “good family” in Hermosillo. Their sister, Maria Ramirez, married into the Barbachano family. Her husband was the son of a state governor. No small feat. The reason I mention the tacky issue of status and/or money, is because Anna seemed to have some.

From the years 1902-1909, she purchases or sells 8 pieces of land to the likes of Simon Cohn, Gabriel Gisler, and HL Wineman. The grand total of monies traded was $670. That is no measley amount of pocket change.

While David is a part of the purchasing occasionally, Anna is unique in purchasing several pieces in her name alone. Quite saucy for the times, I would imagine.

With Anna’s last large sale, I wonder if the families were starting to think of moving on to Orange County. They disappear from Ventura County right after 1910. There is one more tale that is posted in the “Oxnard Courier.” The story, however, belongs to David Romo, Jr.  I will give him the credit before we take the family down south.