I thought this little story was cute. I would be very surprised if the Romos had wanted the story in the newspaper. It was in the “Oxnard Courier” on August 19, 1910, after having run in the “Los Angeles Times.” The article is under “Former Camarillo Man….”

It appears as if good match for the Romo sons could not be found in California. David Sr. contacted his sister. (And darn it if no one mentions her name!!) She came from Mexico and brought her two lovely daughters along. David Jr. fell for the youngest daughter, Carmela Martinez. Because she was only 17 years old, she was too young to get married. Her father, Ramon Martinez, came from Ures, Sonora, to argue his daughter should go back home until she was old enough.

Maybe David Jr. was too ardent a lover. Officials decided to put Carmela with the jailer’s wife to keep her safe until her fate could be decided.

I did find the end to this episode. Below there are two manifests. 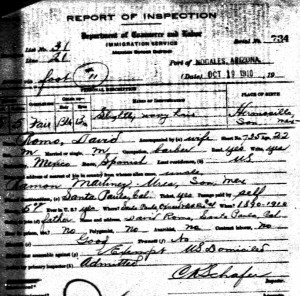 The gentleman brought his lady home. Yea!! These forms stated they were going back to Santa Paula. Now that Carmela was in the family fold, the families could move on to a different life in Los Angeles, and then Orange County, CA.