The Escalantes and the Romos left Ventura County after almost 15 years. They left behind friends and their businesses. They decided to move down toward the growing metropolis of El Pueblo de al Reina de Los Angeles. (Ha ha! I’ve always wanted to use it’s full Spanish name).

The opportunities at the beginning of the 1910’s must have been amazing in California for families that had hard-working members in them. These two families ended up Santa Ana by 1915. However, they did make a stop in Los Angeles for a while. “What makes you say that?” you may ask. Hard as I have tried to find more out about this tiny side stop, I have only one piece of documentation to prove it. 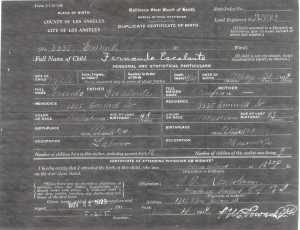 The baby of the family, Fernando Escalante, was born on May 31, 1914 in Los Angeles. He came into the world at 12:30 pm. He was delivered by a medical student named S. Rosenkranz. The certificate shows us a few other things as well. He was born in the house where the family was living. They were residing at 3335 Emmett, Los Angeles. I wanted to show where this location was, but it is very difficult to find a map from 1914 that is easy to read.

One other interesting fact that was found on the form was Rufina had her share of losses when it came to childbirth as well. While she did not lose near as many babies as her sister-in-law, Anna, she had lost three. This form tells us that Rufina had 12 babies, 9 now living. Rufina had Fernando, her last baby, at age 43. Leonardo was 48.

This was the only stop I found for the two families in the Los Angeles area. There must have been family or friends in the vicinity. They moved on one more time as a collective group. Rufina and Anna became the first “Housewives of Orange County” after they move to the present Santa Ana. It wasn’t going to last long though.

By June 1915, the lives of the Escalante family changed forever.